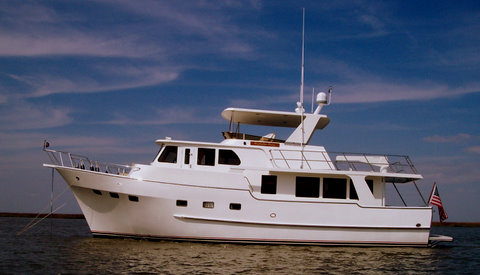 It's hard to keep up with the blog, but lets see if I can get you caught up with us.
We left Southwest Harbor and headed to another beautiful anchorage in Vinalhaven in Carver Cove. On the way to Vinalhaven, we wished we would have picked up some lobstah before we left. While under way, Stephanie waved a little cash on the bow at a lobsterman, (Miss Whitney out of Stonington) out checking his traps, and voila, we had six freshly caught labstah on board. Three for lunch after we anchored, and three for lobstah rolls for dinner. Still not tired of them yet! We headed out the next morning for Rockland to have our now fixed davit (BOAT...Bail Out Another Thousand) put back on September Song. After two tries, they finally got it back together, and now we can get Half Note (our tender and family car) off the upper deck, and into the water. I would have fixed it myself, but the hydraulic ram seals need to be replaced, and that took a hydraulic shop.
While we were in Rockland, we got a wonderful surprise. Doug (Gypsies in the Palace) had to fly to Kennebunkport to set up some repairs on their home there, so he drove to Rockland, picked us up, and we spent the afternoon in Camden, ME. It was great to see Doug. The only thing that would have been better, is if Tammy was with him.
After leaving Rockland, we headed to another anchorage in Harpswell. On the way there, we saw our first whale. It breached about 150 feet to our forward starboard. It was so cool, and SO Huge.
The next morning, we headed to Portland. Good cruising friends, Rusty and Nancy, (Summer Winds) have been cruising North, and were already in Portland, at the same marina we were going to stay at for five days. The first night with them, we headed down to Old Port, to an Irish bar for some catch up time.  We had a rental car, so the four of us did a road trip the next day out to Two Lights Lighthouse, the Lobster Shack, (Rusty's first lobstah, Nancy doesn't eat them????) and out to Portland Head Light.
Thursday, August 16th was my Birthday. What a great birthday I had! Thanks to all my Facebook friends and family for making my birthday so special. Especially my best friend, partner, Admiral of our ship September Song, and the love of my life, my beautiful wife, Stephanie. She took me to a little romantic place in Portland, ME. A three hour seven course dinner, lots of laughs, and a very special night. Thank you my love. How did I get so lucky! I love my life!
Also, while in Portland, we were lucky enough to be able to see Henri, Amy, and the kids (the Brady Bunch) one last time for lunch. (Henri introduced me to lobstah omelet with hollandaise) We hope it won't be as long as this last time before we see them again.
Another great surprise was that John and Colleen Clayton (cruising friends from 2009 in the Islands) drove to Portland, and we spent the afternoon on September Song fly bridge catching up, and the evening in Old Port. It was great to see them again!
We left Portland yesterday morning, and we are now docked in a beautiful little fishing village and artist colony in Rockport MA.
We said goodbye to Maine yesterday, and to all our friends and family there. It was, and you were all were so great. Goodbye Maine :-/
Remember to click on Older posts to see the rest of the pictures.
September Song (pointy end South) Out
Bob 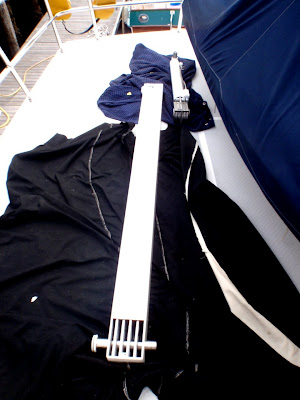 Our davit in pieces. BOAT stands for Bail Out Another Thousand! 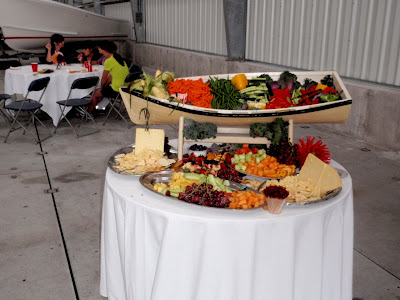 Our last night, the marina had an open house at their new building. 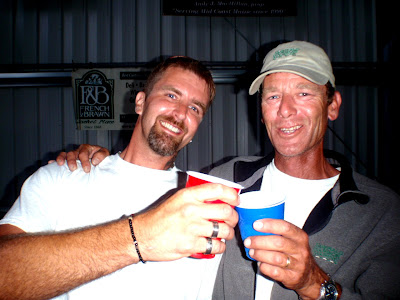 J.J. and Steve, the two guys that repaired our davit. (Before the party!) 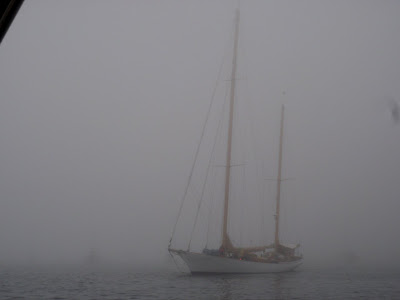 Another foggy morning when we left Rockland, but it did lift after a couple of hours to a beautiful, calm, clear day.